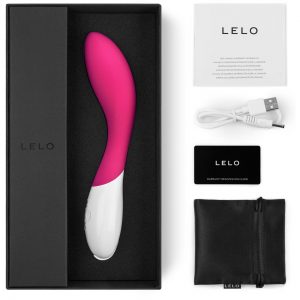 I’m excited the day has finally come when I can sit down and write a Lelo Mona 2 review. This is a review which has been a long time in the making – since before I had a website and wrote about sex toys online.

I started recommending this toy to my friends shortly after buying it – and now that my platform for talking about sex toys has expanded beyond my close friends – it’s time to share my experience with all of you!

So I’m going to try to temper my passions for this toy a bit so I can give you a more objective look in my Lelo Mona 2 review.

The Mona 2’s vibrations are definitely on the rumbly side which means you’ll feel them deeper in your body. And you’re unlikely to become numb from the vibrations after a long time of playing like you may with buzzy vibrations. Most people prefer rumbly vibrations to buzzy ones which feel more limited to the surface.

I’d say the Mona 2 is about 7.5 of 10 on rumbliness which is right in my perfect spot. I still like a hint of buzz which adds a bit of an extra oomph to the underlying rumbles. If you need REALLY rumbly vibes, you can find similar vibrators that crank it all the way on the rumble spectrum. If that’s you, the We-Vibe Rave may be more your lane. Plus, it can be app-controlled!

How about vibration power?

When I start playing, I keep it vibrating on the lower power levels until my body’s heated up and ready to go! If you prefer less intensity, you could definitely stay there and ride the low rumbly vibes til the end.

And the range of vibration power from low to high is great if you want your play to extend past the first orgasm. After my first orgasm, I need less intensity near my clit immediately after. I’ll let the Mona 2 keep vibrating on low nearby my clit without touching it. This usually get’s me worked up pretty quickly again, and I’ll turn it up high for another O.

There’s six different vibration patterns from a constant buzz to a rolling wavelike pattern. You can cycle through them with the buttons on the handle. If you have lube on your fingers they can be a bit tricky to press, but I never have difficulties any other time.

When I’m getting close – if I’m really worked up and just want to get there – constant vibration at high power does the job for me every time. But if I’m in the mood to make it last, the rolling wave setting is a great way to tease and edge for a bit before letting myself finish.

Versatility is one of the main things the Mona 2 has going for it. It’s curves, size, and the simplicity of maneuvering its handle make the Mona 2 work really great for both internal and clit stimulation.

I actually prefer using the Mona 2 on my clit and I love the broad stimulation from the wide part of the head. I’ll let it curve around the side of my clit to provide great vibes to the whole area. But if you prefer more pinpoint stimulation like you’d get from a bullet vibe – the tapered tip can give you that too. I like to use the more focused stimulation once I’m really close to orgasm.

If you don’t like any precision stimulation internally, you can find toys with a completely flat head or a consistently broad shape. But If you do enjoy some precise internal stimulation (a bit more like getting fingered) the Mona 2 may be a great choice for you.

Where the Mona 2 really shines for me is during partnered sex! This toy quickly became my go-to when I want to finish with my partner inside me. I started out trying smaller vibes like eggs, bullets, and pocket rockets during sex – and they worked okay.

But it quickly becomes crammed down there with a sex toy, my partner’s body, and my own hand all trying to work my clit and G-spot in the same space. Not to mention it’s just a little uncomfortable in some positions to keep my hands right near my clit the whole time. Large wands keep my hands out of the way better – but then the toy itself is so bulky that it get’s in the way and limits what my partner and I can do.

The nice handle on the Lelo Mona 2, and its slimmer but long curve allow me to keep my hands out of the way while the Mona delivers vibrations right to my clit – and the slender shape of the Mona makes sure the toy itself stays out of the way of my partner’s penis or fingers in me too. As you can see, even if I’ve got the Mona 2 down pretty low, my hands are clear out of the way.

If you’ve had trouble finding a good toy to use during sex, it’s worth giving the Lelo Mona 2 a try.

Will It Wake The Neighbors

The Mona 2 is pretty quiet, but it definitely depends a bit on your scenario. The maximum volume is less than 50 decibels (db). To give you some sort of idea – 40db is “quiet library sounds” and 50db is a refrigerator. So it’s somewhere between a library and a fridge.

From my experience on the higher power settings being used externally – someone in the same room is going to notice.

Sometimes my husband can’t tell when I’m using it next to him in bed. But if I’m already pretty worked up – I don’t need to turn the vibrations up all the way. If I had to use the highest intensity – he’s gonna know.

But suppose you’re camping for the weekend – your friends in the next tent over are probably NOT going to notice the Mona’s rumbly vibrations. If you can’t tell, I enjoy a bit of sneakiness and the Mona 2 has been a good companion for my fun.

The low rumbly vibrations are pretty easily dampened too. Especially if you’re using the toy internally or even externally covered by a thick blanket (or sleeping bag).

The Mona 2 is easy to clean. It’s body-safe silicone and ABS plastic. AND it’s 100% waterproof. So not only can you use it in the shower – you don’t have to worry about water getting in it when cleaning it. So just a good scrub with soap, a full rinse, and you’re good to go again.

I think the Lelo Mona 2 is a great toy if you: 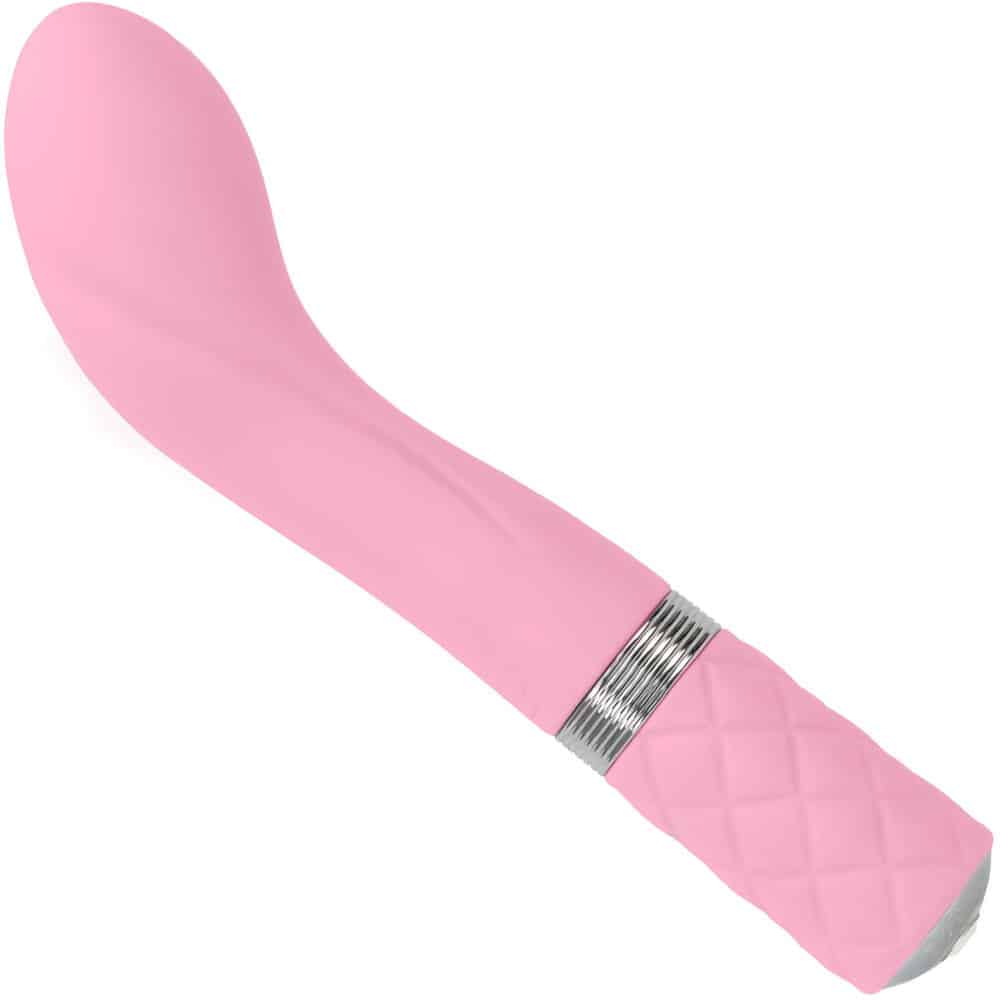 It has some differences to be aware of. Its curves aren’t as accentuated and the tip is broader rather than pointed which can both make it a little harder to use during sex. But those who prefer pure broad stimulation may find it refreshing.

Also it’s a touch more flexible than the Mona 2. The head gives a little more when you press. This can make it more difficult to apply the pressure how you want, but those who like a little more give internally will enjoy it. The silicone has a bit more grip to it than the Mona’s completely smooth texture too.

Lastly, there’s no vibration patterns. It’s pure, constant vibes. You can change intensity, but can’t cycle through patterns. If you’re someone who likes simplicity in the control, here it is.

We’d Recommend the Pillow Talk Sassy Over the Lelo Mona 2 If:

The Gigi 2 offers a flat head to press right against the G-spot and deliver broad pressure and vibrations over the whole area. The shape also has a bit of a lip to it, which you can use to tug at your G-spot a bit.

The main downside – the vibrations are not as powerful.

This user’s experience pretty much sums up my thoughts on who the Lelo Gigi 2 is for.

We’d Recommend the Lelo Gigi 2 Over the Lelo Mona 2 If:

If you’re interested in the shape and vibration style of the Mona 2, but have a taste for giving up control, the We-Vibe Rave may be the vibe for you.

You can connect the We-Vibe Rave with the We-Connect app to give full control of your toy to a partner. 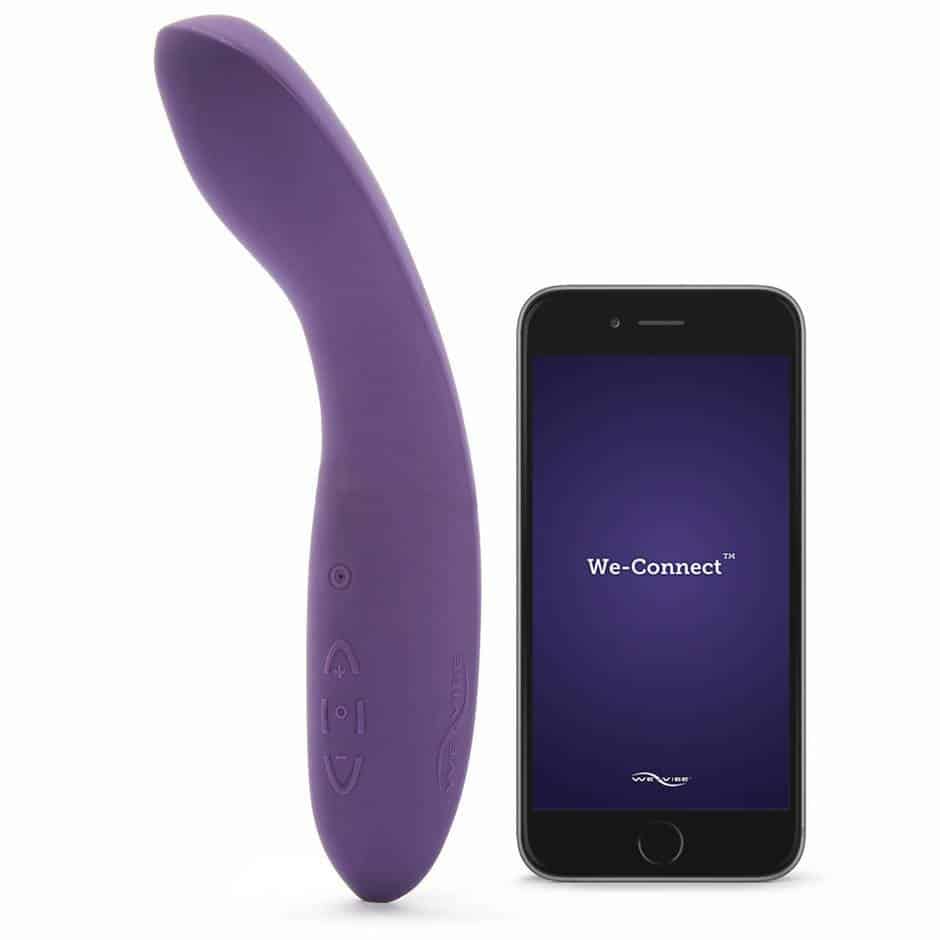 This also lets your partner deliver a limitless range of vibe patterns if you enjoy variation.

It’s got great rumbly vibrations like the Mona 2. It’s actually even a bit rumblier than the Mona 2 on the high settings. It’s also a bit louder though if sound is important to you.

Again, its broad shape and less accentuated curves are a bit less conducive for use during partnered sex. And the buttons on it are a bit trickier to easily control.

But if you enjoy long distance fun, or giving up control – those options may be more than enough to make up for it.

We’d Recommend the We-Vibe Rave Over the Lelo Mona 2 If:

The Lelo Mona 2 is a great G-spot and clit vibe – and in my experience one of the best vibrators to use on my clit during partnered sex (my personal favorite actually). If you have it in your budget and want the versatility of broad or pinpoint precision to your favorite spots, it may be a great choice for you too.