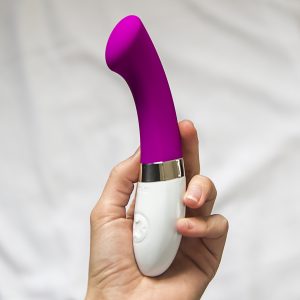 The Nike Swoosh, the Starbucks Mermaid, and the flat head of the Lelo Gigi 2 – some of the most recognizable and iconic shapes in the world.

Okay, maybe the Gigi 2 is far from that level of fame.

Today, we’ll help you decide if it’s worth exploring for yourself with our Lelo Gigi 2 review.

Will the Lelo Gigi 2’s vibrations bring you over the edge and into orgasmic bliss?

For me, yes. And for a lot of people yes. The Lelo Gigi 2’s vibrations are rumbly and whisper quiet – it’s an absolute perfect companion for sneaky orgasms. And Gigi’s vibes are plenty powerful for many people.

But they are less powerful than some other vibrators.

Since I’m just one person with only my own experience to go on – I got curious and wondered how many people loved the Lelo Gigi 2’s power and how many wanted stronger vibes.

So I went through hundreds of reviews. Customer experience ranged from “I cranked it to high power and folded like a lawn chair” – a very satisfied customer – to “doesn’t do anything for me.”

As with most things, you can tell a lot from most people’s experience on average. So I tallied the results for you! I counted any customer review from “pleased with my purchase but the power of the vibration could be a tad stronger” to “weak vibrations” and put them in the “Customer mentioned they wanted more power” category.

As it turns out, most people enjoy the Gigi just the way it is. And as I read through reviews, a lot of people mentioned that even though they usually had trouble orgasming from penetration – they came easily with the Gigi 2. Others mentioned learning to squirt with the Gigi.

There’s 8 different vibration patterns and you can change the intensity for each pattern. Just cycle through settings and increase the power with the buttons on the handle.

How to Use Lelo Gigi 2

Flat Tip to Spread The Sensations

I find this feature great for clit stimulation – especially if you have a sensitive clit. Extremely focused vibrations can feel like too much stimulation for me sometimes. But when you do want more focused vibes you can turn Gigi upside-down and use the edge of the tip for precise vibrations.

The shape of the Gigi with its curve and flat tip is truly designed for G-spot stimulation. Some people find narrower, more pointed G-spot vibrators pokey and a bit painful on their G-spot. I must admit, I sometimes am one of these people – which is why I use my Lelo Mona mostly for clit stimulation during sex with my partner. But the flat head of the Gigi presses a wide, comfortable surface over the entire G-spot area. Here’s how the Gigi’s tip compares to the Mona’s.

You may enjoy the Gigi if you’ve had issues with other toys making you feel like your insides are being jabbed. Here’s what one customer had to say about it.

The Gigi has a shorter insertable length than a lot of other G-spot vibrators. Luckily the G-spot is located pretty shallow along the front wall near the entrance. But if you enjoy playing around deeper in – Gigi may not reach as far as you’d like. It can also be more tricky to maneuver solo for G-spot play since it’s not as long as other toys like the Mona.

How’s Gigi Do During Sex?

You can also use the Gigi 2 on your clit during partnered sex! It’s elegant curve and handle create ample space for your partner to work your G spot while the Gigi works your clit – without becoming over-crowded!

Can the Lelo Gigi 2 Keep a Secret – Noise Level

If you fit any of those descriptions, the Lelo Gigi 2 could make a great companion for you. The Gigi’s vibes are quiet, deep, and rumbly (not high-pitched and buzzy).

Used externally, I can go unnoticed in bed next to my husband if I’d like. And if you’re using it for G-spot stimulation your body dampens those sounds further.

Even at its highest levels the Gigi is quieter than most vibrators of the same power.

Again, since sexual experience and preferences are so different from person to person it’s good to know MOST people’s experience – not just mine. So from hundreds of customer reviews I looked through all the reviews which discussed noise level and tallied the results.

From the reviews I read, zero customers said the product was loud and most people who mentioned the noise level raved of its quietness. I did come across 3 customers who mentioned that the toy became loud after they had damaged it – more on that in the next section.

It’s fair to say most vibrators aren’t as well known for being quiet as the Gigi 2.

And if discretion is important to you, I got my Lelo Gigi through Lovehoney which always ships in plain packaging which won’t draw attention.

Is the Lelo Gigi 2 Waterproof

Yes! You can have fun with the Gigi 2 in the shower. And thank goodness because let’s face it – shower sex seems hot, but good shower sex is really hard to have. A trusty toy in the shower can help guarantee orgasm and pleasure for all.

The Gigi is also super easy to clean since it’s waterproof. You can let warm water run directly over the entire toy as you wash with soap and water. It’s best to clean your vibrators both before and after use.

What is the Best Type of Lube for Lelo Gigi 2

Check out the Gigi’s pricing here or keep reading for some other alternatives.

First, though I find the power of both the Gigi and the Mona to be sufficient for me, the Mona is certainly more powerful. And I do find myself reaching more often for the Lelo Mona and turning it all the way up. It can be a touch louder than Gigi, but it’s still very quiet. I’ve used it sneakily many times!

I find the Mona’s buttons a bit easier than Gigi’s to press as well. This can be nice so fiddling with buttons doesn’t take me out of the moment.

I also love the long slender curve of the Mona and find it REALLY easy to use on my clit during sex. Like the Gigi, it’s easy to keep your hands out of the way of the action. But you get a bit more maneuverability with the slender shape of the Mona.

Both options are great. It definitely depends what you prefer.

We’d Recommend the Lelo Mona 2 Over the Lelo Gigi 2 If:

The Sassy has more power than the Lelo Gigi 2 as well. If you think you’ll need more intensity, Sassy may be a good alternative. There are no vibration patterns though. If you enjoy wavelike sensations you can’t get them here. It’s all constant vibes – but that can allow you to eliminate more choices and distraction and focus on the sensation.

We’d Recommend the Pillow Talk Sassy Over the Lelo Gigi 2 If:

If you’ve been wanting to try some long distance fun with your partner, the We-Vibe Rave may be a great way to go. Even if your partner is controlling the vibrations, you can still hold the Rave and decide where to deliver them. Or give complete control to your partner and let them make all the decisions.

The Rave’s vibrations are deep and rumbly. They’re more powerful than the Lelo Gigi’s and maybe even than Mona’s. Yet they stay deep and rumbly the whole time. They never get buzzier even when all the way up.

We’d Recommend the We-Vibe Rave Over the Lelo Gigi 2 If: